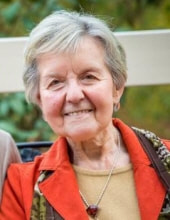 Hazel Hearn Brightbill, 89, of Newtown Square passed away March 24, 2019. She was born in Philadelphia, the only child of Maurice and Gladys Hearn. She was educated in the Philadelphia public schools and later earned her BA in Education from the University of Pennsylvania. In 1951 she was married to Edgar Nixon Brightbill at Grace Brethren Church in Philadelphia. Following employment as an elementary teacher at Drexel Hill Elementary School, PA, Mrs. Brightbill became a full-time, stay-at-home mother to her children. Throughout her life she was also deeply involved with her church and community organizations, including Christian Women’s Club, Young Life, Chester County Choral Society, and the White Horse Village Singers.
Hazel was a member of the Chester County Choral Society for 28 years, from 1987 to when she retired in 2015. She assisted with music at rehearsals several times during Exton Chorale times, and she played piano and sang solos several times. She served as Vice President and Chairperson of Fundraising from 1991-93, and she was elected President from 1993-95. Hazel was chairperson of the dress committee in 1991-92, and she continued to handle the choir dresses until 2015. In 1997, Hazel chaired the committee that planned the CCCS trip to England. The Choral Society is grateful for her contributions and she will be greatly missed.