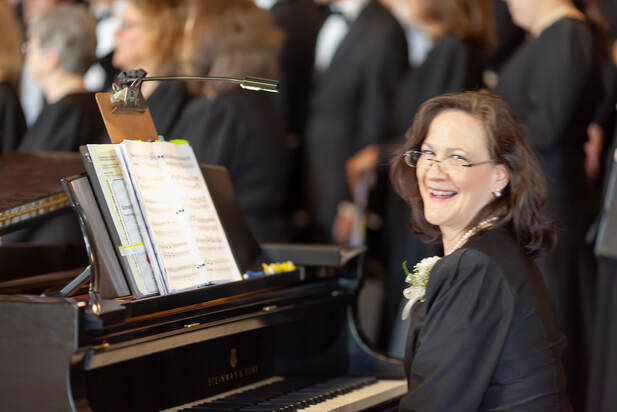 Ann Marie Ellis has accompanied competitions, concerts, musicals and recitals in the Chester County and greater Philadelphia areas since 1981.  She has served as the accompanist for the Chester County Choral Society since  1995.  Some of the highlights of her career include the privilege of accompanying soprano, Lis Cass Geoghegan, in the White House as part of the holiday festivities in December 2000. More recently she has also had the privilege of accompanying Chester County Voices Abroad (CCVA) on their concert tours to Germany and Austria (2008), France (2010), Scotland and  Ireland (2012), and Italy (2013).  These concert tours included performances at venues such as the Berliner Dome in Berlin, Notre Dame Cathedral in Paris, the Basilica of Our Lady of Lourdes for the International Mass and Candlelight Procession, St. Giles’ Cathedral in Edinburgh, Galway Catholic Cathedral, St.  Patrick’s Cathedral in Dublin, and St. Peter’s Basilica in Rome.

Originally from northeast Missouri, Mrs. Ellis holds a Bachelor of Science degree in Music Education from West Chester University, where she studied piano with Richard Veleta and voice with Joy Vandever.  She also earned the Master of Music degree in Music Education at West Chester University where she studied vocal performance with Emily Bullock.